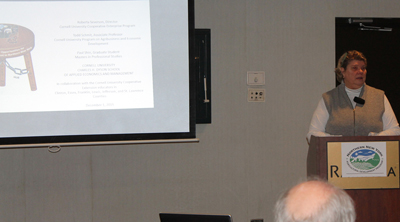 Deming noted that the smaller growers in the regional express interested in expanding their markets through small, ‘localized’ food hub opportunities.

“National data suggests that a food hub needs to move $1 million worth of product to be sustainable. Northern New York does not currently have that much capacity. We will need some subsidy to get rolling and grow big enough to be self-sustaining,” Deming noted. “Four or five smaller growers could go together to start a small hub that can grow into a larger force in the market.”

Deming made note that Community Supported Agriculture has proven to be a profitable model for direct marketing farms and small, independently-owned grocers have been very supportive of local growers. She added that high tunnel and vegetable sector research funded by the NNYADP is helping regional farmers develop production efficiencies that support market demand. 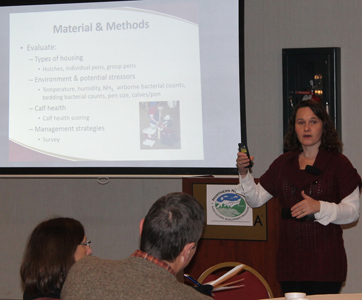 A respiratory health standard of less than 5 was set as the desired score. Approximately 13 percent of calves evaluated in NNY had a score of 5 or higher compared to a national average of 12.4 percent. 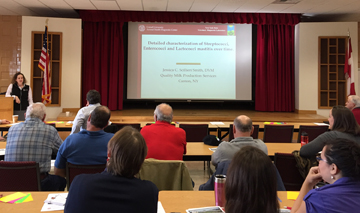 Information was also presented on the NNYADP project evaluating lesser-known, ‘other Strep’ causes of mastitis. Dr. Jessica Scillieri-Smith, DVM (above, at the Chazy meeting, and left, at Hy-Light Farms), a veterinarian with Quality Milk Production Services, Canton, NY, led the research that tested 8.631 milk samples from 143 dairies in NNY in 2014 to more specifically identify the pathogen causing mastitis. The testing found infections caused by species that heretofore have not been considered pathogens in bovine mastitis. In some cases the Lactococcus genus was identified as the cause of more than 50 percent of mastitis cases.

The results of the 2015 NNYADP project evaluating five farms with higher incidences of Lactococcus-based infections will be available soon on www.nnyagdev.org.

Results of the 2014 NNYADP project were requested for presentation at farmer and veterinarian meetings in NY, Vermont and Louisiana in 2015 and by the National Mastitis Council already in 2016.

The instrumentation in the plots captures real-time changes in surface and subsurface runoff, tracking phosphorus concentration and sediment over storm events. More phosphorus was lost in surface runoff from undrained fields under a snowmelt event in December 2014, a remarkable difference compared to the tile drained plots. However, Young said, more data is needed to support the opportunity to mitigate P loss in a major way under snowmelt conditions. The research is also evaluating the loss of immediately available P.

New funding from the NNYADP will support larger field trials of 10 acres or more at Rulfs Farms which has its own tiling machine. The trials will compare tile drainage vs. natural drainage and tie data to crop yield and economic factors.

“The Northern New York Agricultural Development Program funding has provided awesome support for tile drainage research which is really significant for North Country agriculture,” Young noted. “This research is particularly valuable to CAFO farms as they develop more and more efficient manure management to prevent runoff losses with and without tile.”

This regionally-based research is also significant as states refine their phosphorus management requirements for farms. The NNYADP project work is building a model based on sound data representative of actual field conditions in Northern New York.

The tile drainage research was supported by additional expertise from SUNY Plattsburgh.

USDA AVIAN FLU INFORMATION
USDA Animal and Plant Health Inspection Service representatives (below) John Harmer, DVM, and Jennifer McGuire of the USDA Agriculture Research Service shared avian flu (AV) information with an exhibit at the 2016 NNYADP meetings. Just a few weeks prior to the February 12 meeting a poultry producer in Indiana experienced a major outbreak of AV and his flocks had to be destroyed, resulting in a major economic loss. 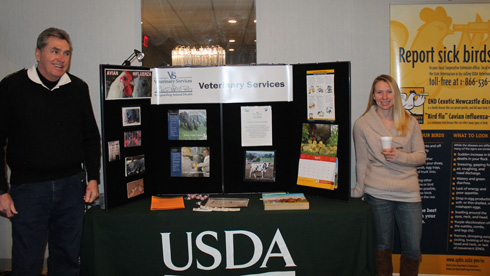 “We are encouraging attention to biosecurity practices in the poultry world from large farms to backyard flocks to prevent avian flu,” said Harmer, a veterinary medical officer with USDA APHIS, Albany, NY. “Our most important message is that if producers are seeing unusual deaths or higher mortality rates in a short time span, call us so we can evaluate what did or did not cause those deaths.” 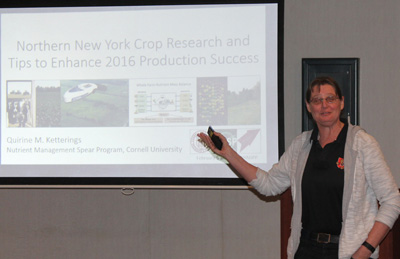 “MEASURE” is MESSAGE from CROP NUTRIENT RESEARCH SPECIALIST
“Measure,” was the number one key for successful crop production suggested by Dr. Quirine Ketterings, left, Director of the Cornell University Nutrient Management Spear Program, at the 2016 NNYADP meetings. Dr. Ketterings, who has conducted crop production, nutrient management and agricultural environmental stewardship research in Northern New York for many years, presented the scope of her current research in the region with tips to encourage 2016 production success.

“Northern New York has seen an upward trend in corn silage and grain production since World War II due to advances in plant breeding and production efficiencies. Challenging weather and field to field variability of soil, drainage and management all continue to limit production,” Ketterings noted.

Her number one tip was “measure yield. We need data to evaluate. Keep field-to-filed, year-to-year management records that can be analyzed to identify what might be enhancing or limited crop production.”

The corn yield study showed yields exceeding the expectations indicated by Cornell guidelines in 2013. In 2014, actual yields were 14 percent lower than expected. Preliminary yield indicators from 2015 are 5 percent higher. The three-year average equals the Cornell database. Research continues to explore factors that influence the variability.

Northern New York farms are participating in evaluating the use of crop sensors to determine optimal nitrogen application during the growing season. Early field results indicate the best window for use of the sensors as the V7 stage of growth.

In speaking about the winter cereals research, Dr. Ketterings commented, “In the last couple of years, crop rotation has been the way to increase yield per acre.” A general conclusion from her work analyzing return on investment is that double cropping properly managed can pay off on the right fields.

A new NNYADP-funded project in 2016 will evaluate the use of brachytic dwarf BMR forage sorghum as a shorter growing season option vs. corn silage. Questions include can the sorghum compete for yield, and can it be late planted or early harvested.

“Based on results to date, we think forage sorghum can compete with corn silage for yield and quality in dairy production systems in the Northeastern U.S.,” Ketterings said.

Data from three NNY sites in 2016 will be added to field trial results from eight sites in central and eastern NY.

Among her other tips for successful crop production, Ketterings suggested managing fields for soil conservation, organic matter, optimal fertility and pH; not basing decisions on just one year of data; using a whole farm perspective, and participating in NNYADP regional field trials.

“We get the most relevant data when we gather it in your backyard. With a whole farm perspective, we see opportunities for farms to improve nutrient mass balance on the field side, management side, and nutrition side,” Ketterings concluded. “Northern New York is sometimes driving the rest of the state with its research.”