“Our initial assessments show site-to-site differences are much greater than genetic differences between corn hybrid selections within a site,” said Joseph Lawrence, a dairy forage systems specialist with the Cornell University PRO-DAIRY program.

Lawrence leads the NNYADP-funded research conducted in collaboration with the Cornell Nutrient Management Spear Program (NMSP). The project is evaluating the use of nitrogen balance and efficiency indicators to enhance precision nitrogen management across sites and corn hybrids. This has the potential to simultaneously advance agricultural environmental stewardship and reduce the production cost of this key dairy crop.

Data from corn silage variety field trials at a northern New York dairy farm in St. Lawrence County and the Willsboro Research Farm in Essex County from 2016 through 2019 were analyzed to evaluate the impact of yield, crop quality, soil health, soil types (5), and weather factors on nitrogen balances, with a specific focus on how much nitrogen is needed for optimal production.

The project established six nitrogen (N) balance indicators, including a basic field N balance that reflects the difference between N applied with fertilizer and manure and N removed with corn silage harvest. Five additional measures of N use efficiency are also under evaluation.

“Understanding the variability in nitrogen use efficiency, field nitrogen balances, and yield grown under the same management conditions and on the same soil type is important to helping growers achieve efficiency in both crop production and resource stewardship,” Lawrence explained.

The multi-variety, multi-year, multi-site data suggest that the highest yielding crops tend to have the highest N use efficiency as well.

“We want to know if the corn yields were a result of correctly, under- or over-fertilizing the field sites. The goal is to reach optimal resource-use, production, and stewardship efficiency with nitrogen application farm-by-farm, field-by-field to produce the highest quality, highest yield crop,” Lawrence said.

With the 2019 field trials on the northern NY farms, the researchers have begun evaluating crop yield in relation to corn stalk nitrate test (CSNT) levels.

“The preliminary results of our corn stalk nitrate testing showed variability in CSNT across corn silage hybrids with a slight hint of a trend toward lower CSNT levels for higher-yielding hybrids. We are looking into the use of a yield-to-CSNT ratio to further explain if nitrogen management was on target. We will add more data this year to draw more substantive conclusions,” said Quirine M. Ketterings, Ph.D., director, Cornell NMSP, Ithaca, N.Y.

The data from this NNYADP project add to a statewide initiative to develop a corn silage yield potential database. 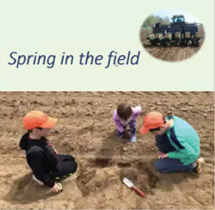 This short (5 minute) slide show/video by Joe Lawrence, Dairy Forage Systems Specialist with the Cornell University PRO-DAIRY Program, provides an overview of some of the activity that takes place on farms in northern New York in the springtime:
• Learn about how growing degree days (GDDs) affect the start of grass, alfalfa and corn crops.
• Learn when to measure alfalfa height to help identify an optimal date for a first cutting of an alfalfa-grass mixed crop in fields in the Towns of Martinsburg, Turin, and West Turin.
• See alfalfa snout beetle collection on a farm in the Town of Denmark to support the science pioneered with NNYADP-funded research to control this destructive crop pest known to impact at least 9 counties in New York State and areas of southeastern Ontario, Canada.
• Joe’s son Ben provides some narration and joins “Dad” and siblings Colin and Caroline to demonstrate how to check the performance of a corn planter in the Town of Croghan.

All COVID-19 restrictions were observed during the filming.

Click here to read the announcement of the latest project results

The Northern New York Agricultural Development Program (NNYADP) is funding the research that is being conducted by the Cornell University research team of Debbie J.R. Cherney, Ph.D., and Jerry H. Cherney, Ph.D. The latest results report of trials on farms in NNY is posted under the Research: Field Crops: Grasses tab at www.nnyagdev.org. (Click here to go to https://www.nnyagdev.org/wp-content/uploads/2020/04/NNYADP2020AlfalfaGrassReportFINAL.pdf).

The NNYADP trials are evaluating the opportunity to add European varieties of meadow fescue, a winter-tolerant perennial grass, to alfalfa plantings. The goal is to successfully grow meadow fescue as 20-30 percent of a mix with alfalfa under northern New York conditions. The spring harvest may account for up to half of the total forage yield of a crop grown to feed milking dairy cows.

“Many of the European meadow fescue varieties we are evaluating were developed in harsher environments than those in northern New York, so they should overwinter successfully here, but we need to evaluate the opportunity for yield and quality and their competitiveness with alfalfa,” Jerry Cherney explained.

The U.S.-bred meadow fescue in the NNYADP trial showed the highest neutral detergent fiber digestibility of the 19 varieties trialed in 2019. The seed supply of the variety known as Hidden Valley for the farm from which the variety has originated sold out almost immediately after it became available. The NNYADP trial data indicated that the Hidden Valley meadow fescue grew at the desired grass percentage in tandem with alfalfa.

Harvested samples are assayed for alfalfa-grass percentage and alfalfa and grass quality in terms of crude protein, lignin, and fiber; dry matter yield; and evaluated for the influence of soil type, drainage, fertilization, seeding rate, and harvesting schedule on crop quality.