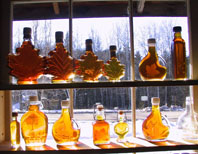 In 2019, Farrell estimated the regional value at more than $12 million.

NNYADP-funded projects have developed research, outreach, and technical assistance opportunities that provide producers and landowners with the tools needed to continue to develop NNY as a regional maple sugaring powerhouse for New York State.

Attention has also been given in recent years to pollinator health: click here to read about the 2016 NNYADP project to improve beekeeper management practices to increase pollinator health and honey production in NNY.